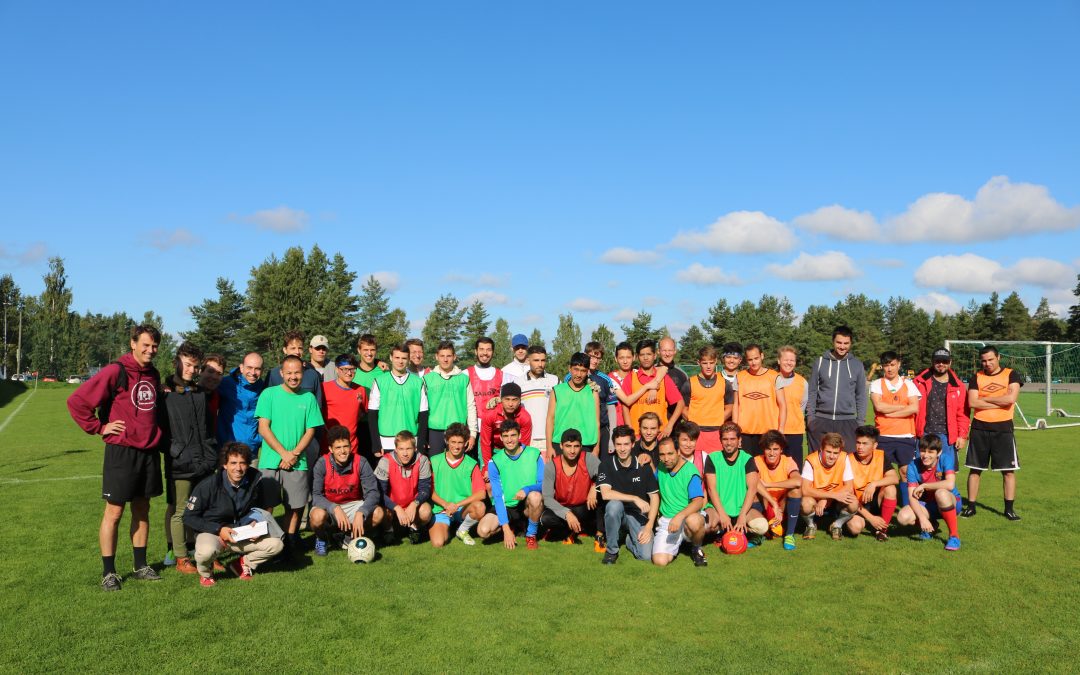 International Youth Cooperation Suomi and Valolinnan refugee camp organised on September a football match with refugees and participants of the Erasmus+ programme “Active Youth for an Inclusive Europe”. The participants from IYC came from 6 different countries: Croatia, Finland, Hungary, Latvia, Romania and Spain. They were in Malminharjun kurssikeskus (Heinola, Finland) for a 10 days programme organised with the cooperation of the European Union. The refugees in Valolinnan refugee centre come from different countries from the Middle-East, mainly from Afghanistan and Irak.

“This is a beautiful occasion to meet other cultures, other nations and other dreams… other people. Specially here where we played some sports and this is a great opportunity to see how they function here.” -Said after the match Luka, from Croatia.

After the match Luka and Ahmed changed t-shirts. Ahmed commented: “I’m really happy about this because I met really good people. It was really good game in here, this was Wonderfull for us. It was like the first time I would play with other guys [from different cultures]. It is really good for us, thank you to each other guys, each other.

After the match the participants stayed to share some sport drinks and snacks.

“This occasion is awesome that other cultures and other peoples meet each other and play together! It is fair play, it is all about love” -said Alan, who trains once a week the football team of the refugee centre.

“It is really good time. We had this project where we activate refugees and it is really nice to have other countries as well. As you know we have so many different nationalities and languages but in sport we all have the same language.” Commented after the match Inka Sipilä, who works as the sport project coordinator in Valolinna refugee centre.

IYC organised 4 teams where refugees and volunteers played together. Both the weather and the facilities were perfect. After a lot of hugs and thumb-ups the refugees went back to their home in Valolinna and the volunteers continued to Malminharju and their workshop “Active Youth for an Inclusive Europe” where during 10 days were thinking about solidarity projects, inclusion and youth cooperation.